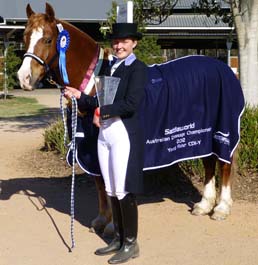 Fawks Stud is very fortunate to have the very talented Fern Wright as part of their family and stud. Fern has been riding since she was 5 years old and believes she was born to ride. She has an incredible affinity with horses and a sensitivity to their needs. Her approach is always calm, confident, respectful and encouraging to both horse and rider.

As a child she competed in all facets of riding at Pony Club and also enjoyed showing. She started on a Shetland pony, but soon moved up to a large pony, Arilpa Montana. With "Zac" she competed successfully for several years at Pony Club, and in Open and Breed Showing.

For many years she has shown all sections of the Welsh Stud book, having led and ridden all these sections at Welsh, HOTY, Royal and Agricultural shows.

As she matured she joined Equestrian Australia and her interests turned to Dressage. She and her brother broke in Kamber Pryderi and that started a long career for the combination competing successfully in Showing (winning Supreme Ridden Welsh at 2 All Welsh shows), Working Hunter and dressage.

In Dressage they have competed from Preliminary to Grand Prix together, learning together as they climbed the ranks, and gaining many excellent results. She has been very successful as a Young Rider in Dressage, including 2012 Champion Young Rider at the Australian Dressage Championships, Under 25 Big Tour Champion 2017 Boneo Classic, Under 25 Big Tour Champion at 2017 Youth Dressage Championships. In addition to BB she now has quite a dressage team out competing.

She has started many horses and ponies, trained them, and helped people sell them. She starts and trains all the stud's ponies and horses including her younger sister's current saddle horses.

Fern is proudly sponsored by: